And so it is with death. But the sombre loneliness of death is soon broken by the tributes. Family and friends pay homage to the dead one's life - his personal and professional achievements. Some of these tributes are simple, haltering words spoken by grieving relatives. But some tributes come from more stranger sources...

Often first on the scene to pay tribute is Mr Bono, the lead singer of U2. It doesn't really matter who has died. It could be a rockstar, a poet or a politician, but Bono will often take time off from wrestling with the twin Gods of irony and conviction to offer a few words of solace.

Now - for the first time in colour - themanwhofellasleep has collected together a few of hair-weave-hero Bono's most poignant tributes to the dead.

Roy Williams was a 42-year-old postman from Enfield, North London. He died in a car crash in November 2002. He leaves behind a wife, Cindy and two daughters.

"Roy brought rock'n'roll to the postal delivery service. He wrote the postal blueprints that U2 used when we first started posting letters. Before Roy, people thought that they had to lick the stamp correctly, write the address clearly and include a full postcode - Roy threw that out the window - all you needed was an envelope and attitude. Roy Williams taught me to sing in my own voice." - Bono, December 2002.

Andrejz Lipkin was welder from Gdansk, Poland. He died last summer aged 83 after a long battle with cancer. He left behind many Lipkins - from sons and daughters to numerous great-grandchildren.

"Andrejz probably wouldn't have liked a rock'n'roll guy like me, with my long hair, my earrings and my earnest but impotent way with lyrics. But that doesn't matter. Rock'n'roll loved Andrejz."

"Andrejz's story is your story, is my story, is everyone's story. It's a story of struggle, swagger, style and verve. He looked at welding the way that Picasso looked at women. He looked at welding like he looked at life - as a lover, as a fighter, as a cocksure boxer trying to open a tin of tuna with his gloves still on. Andrejz was the contradiction at the heart of a business I love - welding." - Bono, July 2002.

Amanda Coombes lived in Hightstown, New Jersey. She died in 1998 aged just 17, when she was struck by a puck at an ice hockey game. She had been planning to go to Harvard University, where she was to major in Math.

"It's a terrible shock when one so young dies. I talk to God and ask him if he is testing me. He only replies cryptically - be telling me that I didn't even know the girl and that it's a bit presumptuous to start mourning as though she were a personal friend. I talk to God often. I have so few peers."

"Amanda ripped up the rule book when it came to Math. She looked Math in the eye and was brave enough to add when she could have subtracted, to multiply when she could have divided. She was more than a woman, she was a sister, lover, and a mother. Even though she never had kids." - Bono, January 1999.

If you enjoy the music of U2, why not try Bono's old-fashioned California gumbo squid? At $3.99 a tin, the price cannot be beaten. 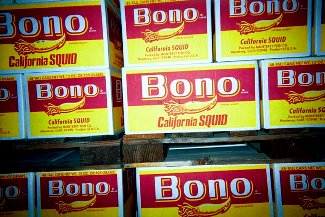