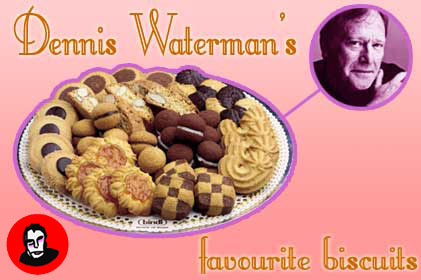 Alright biscuit lovers, it's me, Watery, here to present you with some more of my favourite biscuits.

To start with, ask yourself: what is a biscuit? Is it a little confection you might eat with your tea? Or is it a symbol of everything that is beautiful but intangible in this world? If you said the latter, you'd be... wrong!

Remember: a biscuit is just a biscuit. It is not a metaphor for something larger. Enjoy the biscuit for what it is, not for what you want it to be.

That said, let's have a look at today's biscuits.

1) the fig roll: I remember when I was filming Minder in the early 80's. In the breaks between scenes, me and George Cole used to play poker for fig rolls.

The fig roll is the oldest biscuit in Britain. When Adam and Eve ate the Apple of Knowledge in the Garden of Eden and got ashamed of their nakedness they covered their naughty bits with fig rolls - and I should know, for I was there in the guise of a snake! I have always existed in some form or another. My current human form is but a shell. The fig roll was worshipped by Aztecs as the excretion of the gods. Foreigners are a funny sort. 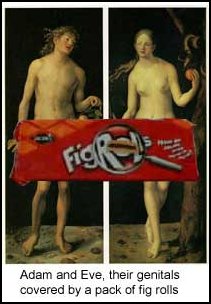 2) the ginger snap: I remember when I was filming The Sweeney in the 70's. In the breaks between scenes, me and John Thaw used to play ginger snaps. We'd pile biscuits on top of each other and when we saw two similar looking biscuits we'd shout out "Snap!". It's a great game.

The ginger snap was brought to Britain in 1944 by Marco Polo. Until the mid-1950s they were rationed by the government and were highly sought after by collectors of both sexes. I remember my old man telling me about his first ginger snap, he'd found it on the body of a dead Jerry pilot. It was in the newspapers and everything.

3) the custard cream: I remember when I was filming Apocalypse Now in the jungle. I was having trouble with my accent (I never did get the hang of it - I was eventually replaced by Martin Sheen) and consulted Francis Ford Coppola, begging for help.

Now, Franny is a real actor's director, so he didn't actually speak to me personally, but his assistant smacked me round the back of the head with a spade. When I came to, I was naked in a ditch with a custard cream in my mouth. As I trudged back to the film set I pondered what Franny had been trying to tell me about the role. Eventually I gave up worrying and just ate the biscuit. So, you see, the custard cream has huge personal significance to me. 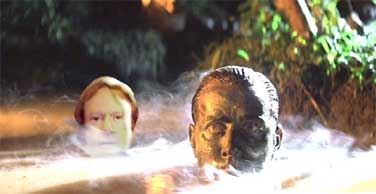 You can download your Dennis Waterman's biscuit wallpaper here.